OILA Supports Keeping All 4 Driving Lanes on Santa Rosa Boulevard -- See below for the Latest News and Status regarding a proposed lane reduction.

2.  Email from Okaloosa Island Fire Chief.  See attached and below.

4. Petition supporting keeping all 4 lanes on Santa Rosa Blvd that you can print, sign, and return to OILA.

We are ordering more t-shirts to support 4-Lane Santa Rosa Blvd (first order placed September 25 – thank you). The shirts raise awareness and start conversations when worn around town, and show our support when worn at County meetings. Please wear them often.

To place an order, contact me via e-mail with size and quantity. Payment is due upon t-shirt delivery.

The exact price for this order will depend upon the order quantity – more shirts, lower price. 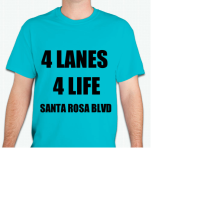 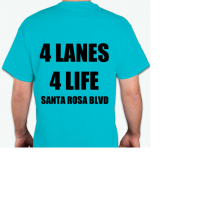 Message from the President

We had a long (2 1/2 hour) but poorly attended (approximately 30 in person and on Zoom) OILA Membership meeting September 12.

As for the low attendance number, I’m a bit perplexed. Many Island Owners tell us they are not aware of the proposed lane reductions from 4 to 2 and think it is just a beautification project that widens the sidewalk for pedestrian, bicyclists and golf cart traffic.

Had you attended this meeting you would have learned why OILA is against this project. This project looks and sounds great until you have to travel on the “New Santa Rosa Blvd”.

First it presents a great hazard to anyone needing Emergency service on SRB. This hazard magnifies the further West you live on the island. Imagine needing a EMS ambulance that is delayed on the reduced lanes; read Fire Chief Strawn’s letter where he states people will die due to their Emergency vehicles having to rely on two lanes of traffic merging to allow their access. Where seconds count do you want to risk emergency care in favor of a designer SRB?

Second visualize tourists trying to find their vacation place or delivery trucks making left turns on just two lanes of traffic. Visualize leaving your house/condo and trying to make a left turn onto SRB (it will be hard enough to make a right turn). The chances of increased wrecks will drastically increase. This also presents a greater hazard to our pedestrians and bicyclists even though they have increased sidewalks (which could still exist with four lanes of traffic.

Third, the majority of residents/owners who recognize these hazards have stated they are against the new SRB plans however the BCC has unanimously voted to approve this plan. Primarily due to the silence of residents and owners who have not stated their objections.

Last, The few who are in favor of SRB’s lane reduction have not, when asked, been able to state why they favor this plan. A most confusing situation.

In summary, everyone needs to become informed of the danger the lane reductions present and become active.  Have your voices be heard; the next County Commission Meeting is:

Please consider attending and address the BCC to state your opinion on this most important project.

Best to you and yours

I am in favor of the Santa Rosa Blvd improvement project. Residents and tourist would definitely benefit from the improvements concerning pedestrian traffic, water drainage and beautification, However I have serious concerns about the reduction from four (4) lanes down to two (2). The concerns I wish to address include the creation of more traffic congestion on Santa Rosa Blvd which will increase the likelihood of motor vehicle accidents which will increase emergency call volume and delay emergency response time. It is very important to remember that Santa Rosa Blvd has one way onto the island and one way off. It’s a dead end Blvd in which you must make a U-turn to leave.

We often have incidents that close at least two lanes of Santa Rosa Blvd, such as power pole incidents that require power company representatives to arrive and mitigate the problem which could take several hours, or Grass fires on Santa Rosa Blvd that can easily take an hour or more. Motor vehicle accidents (MVA) are common on Santa Rosa Blvd in which time would be taken not only to mitigate the initial incident but also time spent waiting for a tow company to remove vehicles to open the road. When you have a fatality from a MVA, additional time will be spent waiting for the proper authorities to arrive, investigate the scene and remove the body before the road is reopened. This takes several hours. At present when we have an incident that closes two (2) lanes of traffic we have two (2) other lanes to mitigate the traffic congestion created by the incident. If the lanes are reduced from four (4) lanes down to two (2) lanes any road blockage immediately west of Caviar Dr ,Pelican DR or Sailfish Dr will stop all traffic on Okaloosa Island coming or going because there is NO alternative route. In other areas the only option would be to route ALL traffic coming or going through narrow side street residential neighborhoods where there is a lot of streetside parking and pedestrian traffic. Heavy two way traffic on these streets will be very difficult which will create its own hazards. Now add a 911 call west of the incident that blocked the road, which creates a situation that requires emergency response through side street residential neighborhoods that already have ALL the traffic overflow caused by the incident that blocked the road. This will delay response times by minutes. The minutes lost will cost someone their life.

This situation will not only affect the residents and tourists of Okaloosa Island and my department, but will also affect any need for emergency response onto or off of the Eglin property which may have a negative impact on any mission operations at the time of the road blockage.

As I understand it, this project is still in the development stage and no plans have been finalized. I understand that many issues are trying to be addressed including pedestrian traffic, water drainage, beautification and traffic mitigation. I understand that this project has challenges and I hope this project will be a success. I appreciate the effort that has already been put into this project. However, I respectfully oppose the traffic lane reduction portion of the project and ask that this option not be considered moving forward from a public safety position. I have confidence that a better solution can be found.