The Santa Rosa Sound Alternate Crossing Study was a high-level planning study that focuses on the feasibility for an alternate road and bridge corridor between Fort Walton Beach and Okaloosa Island. The primary purpose for an alternate corridor is to help reduce congestion along SR 30 / US 98 through downtown Fort Walton Beach (within the vicinity of SR 85 to Perry Avenue) by diverting traffic around this congested segment. Traffic volumes in this area range from 35,500 to 51,000 vehicles per day (2016 FDOT Online Traffic), indicating this segment of US 98 is at capacity. Brooks Bridge is not the traffic constraint.
Improvements are also needed to improve connectivity in the greater Fort Walton Beach region.

The final report of the study was issued in September 2017.  It can be downloaded and reviewed by using the link below.  (Caution:  The report is 411 pages long and the file is 58.9 megabytes in size.)

In the study some ten (10) corridor crossing alternatives were identified as shown in the picture below.  Alternative 1 was the Wright Parkway crossing to Okaloosa Island and then down Santa Rosa Blvd. 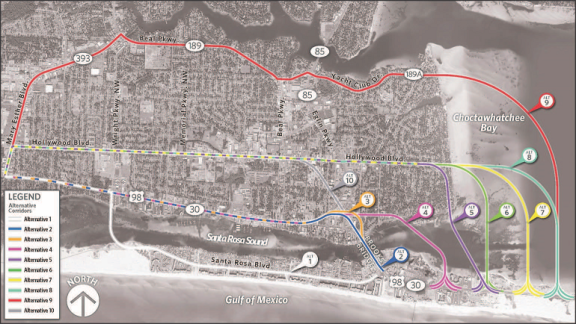 The following table shows the various evaluation criteria and overall rankings.  Alternative 1 was ranked 7 with a recommendation to NOT proceed with further analysis. 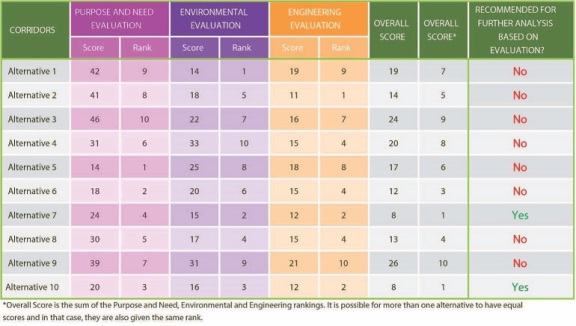 Alternative 1, the Wright Parkway to Santa Rosa Blvd alternative, was found to be not feasible.  The following is directly from the report on pages 91 and 92.

As described in Section 6.2.3, Eglin AFB completed a Mission Impact Assessment and transmitted the findings to FDOT on March 27, 2016 that expressed concern with Alternative 1. The letter stated that “After careful consideration of the assessment’s findings as well as keeping in mind the viability of Eglin’s Test and
Training Range capabilities into the future, we do not support the inclusion of these routes on the list of alternatives moving forward for consideration. As is the case with all the routes identified that would require Air Force property, caution is urged in making any assumption that those lands could be made available
should the project move beyond merely a concept.” EPA and NMFS raised concerns during their ETDM review regarding the potential for Alternative 1 to impact the coastal environment.

After considering the results of the corridor analysis, along with public and agency feedback, Alternative 1 was determined to be not feasible.